Ruth Stoker, a cousin of Bram Stoker, was one of the first 30 students to attend Kylemore Abbey when the Benedictine nuns opened a school there in September 1923.  Ranging in age from 8-18, the girls attended a  “high class school offering all the advantages of a Continental education.”

Tragedy was to strike in the first term at Kylemore, when Ruth, 14, died a week short of Christmas.  She was buried in the Community’s cemetery near the Gothic Church.

Some 60 years later, in September 1983,  I was a new student myself and similar in age.  I was always curious as to who was this girl whose grave was marked with a stone Celtic cross.  I didn’t start my research in earnest until into my adulthood when I had started to write my first novel.

My initial queries were with the Community’s historian, Sister Benedict, who explained that a fire in the castle in 1959 had destroyed any official past student’s records, so little was known about Ruth.  All the same, Sister Benedict asked some of the older retired nuns,  and was told that the story passed down was that she had died from “Galloping Consumption” (TB) and was buried  “at the request of her parents” at Kylemore.

I found this fascinating,  and very sad.

To think the girl might have fallen ill while at school, and then was buried, not at home in Dublin, but to be buried in Kylemore and to be the only child ever to be buried among the nuns.  Ruth remains the only lay person to be buried there to this day.

Who were her family?

What was Ruth’s story?

Using her date and age off the grave stone (18th December 1923, aged 14)  and using her unusual name – Stoker,  and stabbing a guess of a Dublin connection, I started my search with the Dublin 1911 Census.  Call it luck or fate but, I found her.

Having the family census details allowed me to research some more, and with the help of some in-the-know, over time I have found out the following:

Ruth’s father, Frank Owen Stoker,  was a Protestant dental surgeon in Dublin and twice winner of Wimbledon’s Doubles with Joshua Pims. (1890 and again in 1893) 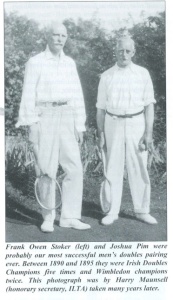 At the time of Ruth’s death, the family were living d in number 23, Westland Row (at the back of Trinity College, Dublin) – with a week to go to Christmas, they were probably looking forward to having their youngest daughter home for the holidays – I imagine a tall Christmas tree and long garlands adorned the fireplace and stairwell. 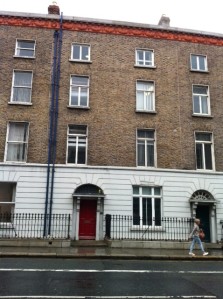 Ruth’s mother, was Rita Maunsell,  a Roman Catholic, and Ruth had 3 sisters, May, Norma and Joan.  They lived in the heart of the Dublin city.   1923 would have been a time of strife in Dublin with the end of the civil war and the city disrupted  with riots and slaughter between Catholics and Protestants alike.  I am guessing here but am thinking the timing of her attending Kylemore was much thought through by her parents at the time to get her away from all the troubles.

Ruth’s  immediate family line died out (Ruth’s sisters never married/had children) – and I was quietly pleased that more research found that while the original Stoker family plot is in Saint Patricks Cathedral,  the Stoker/Maunsell plot is in Glasnevin. 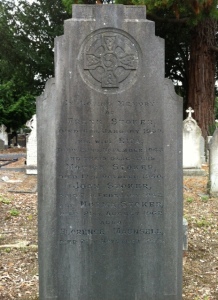 I have visited the Glasnevin plot and can report it is a quiet spot away from the celebrity and national heroes’ graves within the city graveyard.  I can’t help but  think how sad that the rest of her family are there all together,  and Ruth lies so many miles away.  I took a stone from nearby the family plot and when next visited Kylemore, placed it on Ruth’s grave.  Silly perhaps, but I felt something was now being shared between the two locations.

My original book cover of  book one in my series ‘K-Girls’  depicts the young face of a relative of mine – it is taken of my mother’s cousin,  around the same age and time of Ruth’s death.   She represents the fictional face of Ruth – someday I hope to share with you the real one. 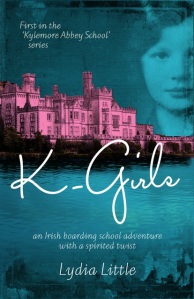 So what do you think? Cancel reply