Walking is good for clearing the mind, body and for writing.  I like to use the time to think about my various projects (I am currently working on book 3 in my K-Girl’s series) maybe carry out some research and to work out any blocks I might have in plot ideas etc.

Recently I had the pleasure of a few days at the Osprey Hotel in Naas, Co. Kildare.  My husband booked us in for a few days post Christmas and it proved a great meeting point for his family.  He is one of six,  and with spouses and children in tow, we were a large gathering.  With most of his relatives living in the Dublin/Kildare/Portlaois environs, the Osprey proved a fab meeting point with swimming pool and carvery and private space –  the location proved hugely popular and successful with the Little clan!

We were booked in for a few days but on a budget so I didn’t get to use the wonderful looking Spa in the hotel.  A gal can only do so much in any hotel room/pool so I used the time to get out and about instead.

I had never been to Naas before.  Well, I lie, I have been through it on many an occasion driving from west Cork to Dublin,  back in the days when the old road went through the town itself.  But I have never spent some time in the actual place.  To me (forgive my ignorance) but I used to think it was a drive-through-mid-land town that had no redeeming features.  How wrong was I!

I made some wonderful discoveries.

Firstly, did you know the full name of Naas is actually ‘Nás na Ríoch’ from the Irish meaning ‘meeting place of the Kings’?  Now I am not going to go down a whole history avenue here, so for any one who would like to find out more, see here

I have a lousy sense of direction so my first wander was to get a feel of the place and where the Osprey was in relation to the town itself.  A 2 minute stroll down Devoy Road  found me at a junction and, grateful for some pointer signs, I was soon discovering the Naas Self-guided Historic Town Walk.

Within another few minutes, I found myself at the Harbour, and nearby Library.  The library was closed due to the holidays, but what a fab location.  Opposite was the old Market House (1810) that has planning posted to convert it to a restaurant and retail spot.  My imagination was reeling of past times and how busy the harbour must have been between canal boats docking and merchants conducting business back in the day.  Now it is a scenic walking/cycling spot where you can loop around the town and follow the canal.  Yes, the canal.

The Grand Canal I will have you know! Yes, it links via Sallins, to the Dublin Grand Canal.

I am a sea bird myself, having been raised and sailed along the Wild Atlantic Way so I am not familiar with canals and the various Waterways of Ireland.  But I was keen to find out more.  There are detailed historic notice boards along the trail that explain the various points of interest so I was learning as I walked.

The day was overcast but dry and with no commitments for the next few hours I took off on my own and found some right gems on route.

I am a sucker for old cemeteries and grave yards,  and like to take a moment to walk among the headstones and decipher what names I can.  (There is that part of me that thinks if I speak the name on the grave stone that their spirit is somewhere else smiling on hearing their name spoken once more.) But this old site had little in the line of names, most graves marked with a simple stone, which is usually a sign of a very very old grave and/or paupers/famine grave.  Towards the end of the canal I came across the old lodge house and wondered too at the people that once lived here and their role played at the ope of the estate beyond the gates. 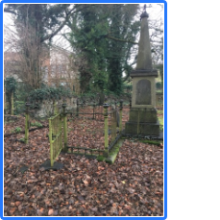 The canal loop brought me around past the Abbey bridge and various canal locks.

In an hour or so I found myself back in town and in St David’s Church yard.  Again I had to walk among the tombstones and spotted a few unusual ones in the mix. 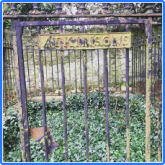 From left to right – ‘Atkinsons’ (forget the dieting?), ‘In Memorian’ – with a list of those from Naas whose bodies were never recovered.  Includes a Bishop (Thomas Leverous), a highwayman (Swift Nix), a pamphleteer/controversialist (Stephen Radcliffe) and a Martyr (Peter Higgins)! Next is a father and daughter tombstone where life springs yet (snow drops peeping nearby), and finally, what looks like a pirates grave with its skull and cross bones but is that of a very old gravestone dating from 1723.

But my favourite experience has to be of a little old cobbler’s shop.  It is a mid terrace dusty looking place where the trade is only revealed as a result of this little notice in the window.  I figured ‘Bill Glennon‘ has a good sense of humour and I wondered at his story too. 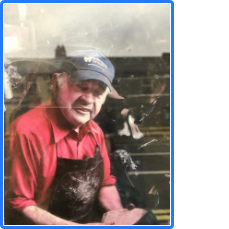 It was only on passing the door that I spotted a portrait in the next window and thought how nice to put a face to the name.  I was bent over taking a photo when  along came a pedestrian.  I was about to politely move out of the way when I saw that the man approaching me was the very same in the picture.

‘Tis yourself!’  says I, pointing at the window.

I introduced myself and we shook hands and got chatting.  It turns out that the cobbler business has been there for over a hundred years and Bill is the last of his people in the trade.

‘Is there not anybody in the family, or maybe an apprentice, that might be interested in carrying it on?’  says I.

Not to miss the opportunity, I asked Bill if I could take his photo next to his shop photo and he obliged.  It was only in our chatting that I glanced down at my phone to check if the camera was on that I noticed his shoes.  I couldn’t resist taking a sneaky shot!  Fab shoes Bill! 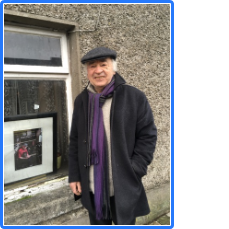 I didn’t get to complete the full historic trail and explore all that I might have liked so I look forward to returning to Naas and doing so.  I will make sure to pop in on Bill and see how he is getting on.